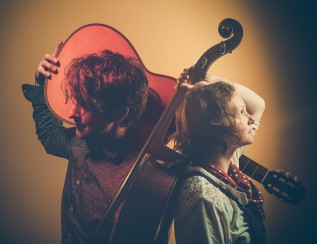 The Bookshop Band – the offspring of an artistic love-affair between a duo of English folk singer-songwriters and a multi-award winning independent bookshop in the UK, Mr B’s Emporium of Reading Delights. They write and perform songs inspired by books, inspired by hundreds of authors from Shakespeare to Philip Pullman, and have released 13 studio albums featuring many of the authors they have worked with.

Soundboard: “There’s no band with a history like that of The Bookshop Band. Originally a trio, they formed as part of a collaborative project with their local independent bookshop Mr B’s Emporium Of Reading Delights in Bath, where they would write music to soundtrack the novels of visiting authors and play it back in intimate settings. Since then, they’ve become something of cult heroes, with four full albums under their belts, as well as being asked to perform in bookshops all around Europe, and with covocalist Beth Porter serving as an in-demand cellist, both for ﬁlm scores and for acts as diverse as Royal Blood and Peter Gabriel.”